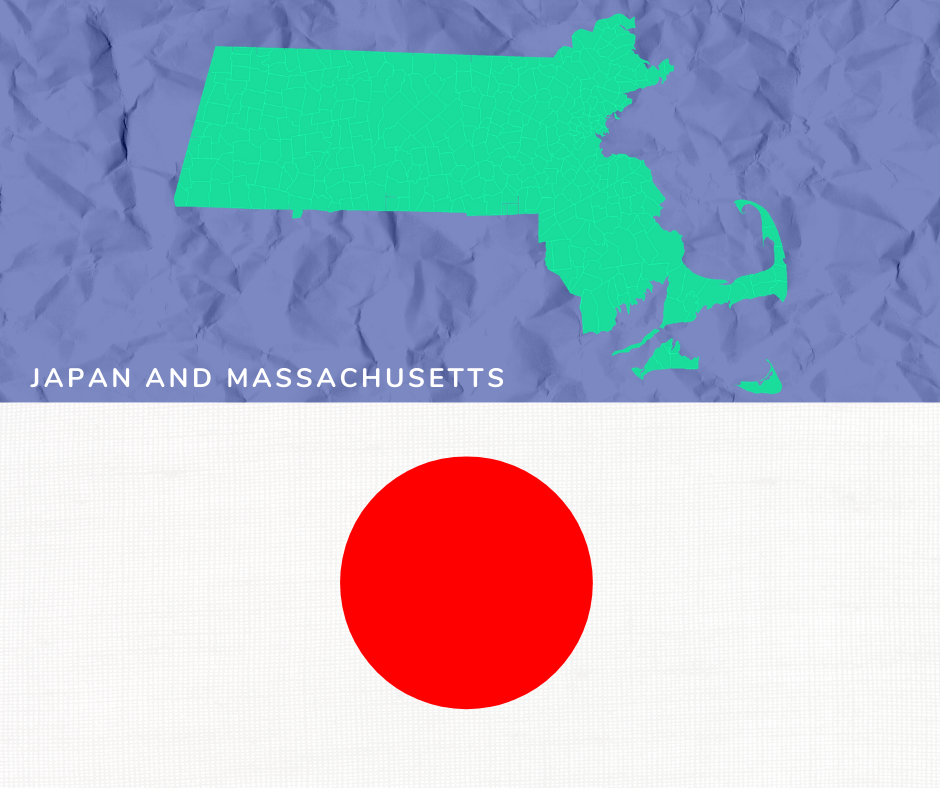 Beginning almost immediately after the Revolutionary War, seafarers on clipper and whaling ships sailing from such Massachusetts ports as Salem and New Bedford traveled to Japan and brought back not only valuable cargo including tea, silk, lacquer ware and precious metals, but equally valuable tales of the exotic East. Soon, these merchants were joined by serious scholars, art collectors, diplomats, and businessmen — all eager to study Japan and its people. Thus, Massachusetts became one of the earliest states in the fledgling nation to establish extensive ties with Japan. Today, these ties are reflected in the high level of Japanese studies in some of Massachusetts' finest colleges and universities, extensive collections of Japanese arts and crafts in a number of her museums, and the strong economic relations with Japan.

Educational ties between Massachusetts and Japan have a colorful history. In 1841, a shipwrecked Japanese later known as John Manjiro, found himself in Fairhaven, where he studied ENGLISH, mathematics, and navigational techniques that are said to have helped him play an important role in Japan's early westernization. Later, agricultural experts such as Horace Capron and William Clark helped to develop what is now Hokkaido University; Clark's alleged admonition to his students, "Boys, be ambitious!" has long been a favorite motto for young Japanese men. Given this background, it is not surprising that a number of primary and secondary schools in Massachusetts have been interested in teaching about Japan. At the university level, such famous institutions as Harvard, MIT, Amherst, and Williams, to name a few, are well known for their programs of Japanese studies. At Harvard, the Reischauer Institute of Japanese Studies is named for the famous Harvard-educated diplomat-scholar Edwin O. Reischauer, while the Harvard-Yenching Library has what is considered the best working collection of Japanese-language works outside of Japan.

On the cultural front, the Boston Museum of Fine Arts is said to have one of the world's finest Japanese collections of Japanese including ukiyo-e and religious works, while the Children's Museum has a very strong Japan program, including its long-standing multimedia "Teen Tokyo" exhibit and the reconstructed "Kyo no Machiya," a traditional Kyoto town house. The Peabody Museum in Salem has a large collection of artifacts used in daily life in 19th-century Japan. The Worcester Art Museum, the John Bancroft Collection of Japanese Prints is deservedly famous, particularly for its holdings of works by Hiroshige and Hokusai.

In economic relations, by the early 1990s, Massachusetts exported nearly $1.5 billion in goods and services to Japan each year, representing some 14% of the state's total exports and making Japan its second-largest market after Canada. Major items exported include industrial machinery, computer, scientific, electric, and electronic equipment, fabricated metal products, chemicals, and primary metals. Official state organizations such as the Office of International Trade, as well as related agencies such as MassPort and the Massachusetts Office of Tourism and Travel are active in promoting commercial and cultural ties with Japan, while the Japan Society of Boston maintains a full calendar of events and classes, many of them aimed at the business community.

Acknowledgement: The above is based largely on "The Survey Reports on Japan-Related Activities in the U.S.," Vol. II. The Japan Foundation, 1993, pp. 309-325)