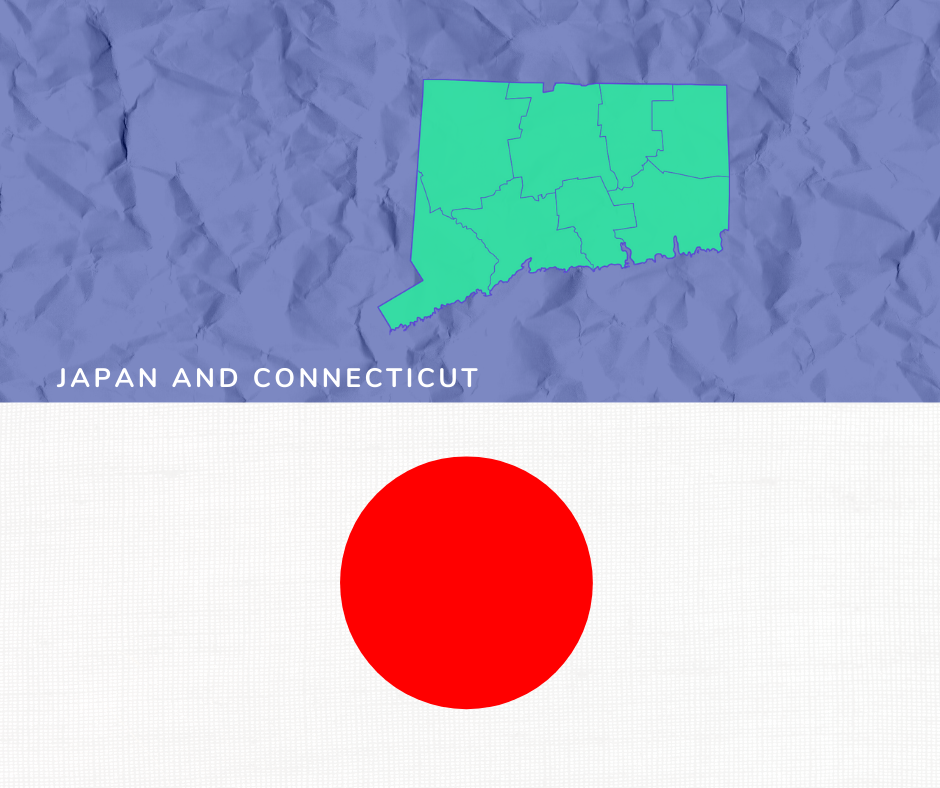 Even before Commodore Perry steamed into Japan on his fabled black ships, Yankee clippers made in such Connecticut ports as Mystic and New London were engaged in commerce and whaling in the waters of Japan. As early as the spring of 1850, one Nathaniel Saxton Morgan, a 16-year-old crewman on the Hannibal of New London, writing in the ship's journal, recorded exchanges with Japanese. Perry's arrival in Japan three years later marked the beginning of commercial relations with the United States. Among the earliest merchants to do business with Japan was Silas Enoch Burrows, a native of Mystic, who departed in mid-1854 to become one of the first to trade with the island nation under the treaty that Perry had concluded.

A few years later, the Iwakura Mission brought with it a young Japanese, Sutematsu Oyama, who became the first Japanese woman to graduate from an American university (Vassar). While she was in the United States, Oyama became a close friend of Alice Bacon of New Haven. The letters between the two were preserved in New Haven and were used recently as the basis for a book about Oyama's life. The spirit of exchange explored by these two women so long ago is still alive today through the Japanese College Women's Association, which promotes exchange and education for women on both sides of the Pacific.

Around the turn of the century, New Haven continued to serve as a center for exchange when Kanichi Asakawa joined the faculty of the Yale history department in 1906. Writing several years earlier, Asakawa had affirmed his desire to "introduce my country in a better light than before to the wide intellectual world and to bring closer in understanding and sympathy the East and the West." Following the Great Kanto Earthquake of 1923, it was Asakawa who spearheaded efforts to collect and sends books to help rebuild Tokyo's devastated library collections.

Connecticut has never had a large number of Japanese residents. In the late 19th and early 20th centuries, there was some unofficial immigration as young Japanese men jumped ship in New York, looking for opportunities to work and study in the United States. Some of these people found their way to Connecticut, where they were initially domestic workers. History tells us that they typically congregated every Thursday in a favorite barbershop in New York City's Chinatown for companionship and mutual support.

Today, the Japanese in Connecticut are largely businessmen who commute to jobs in New York. Largely through these individuals and their companies, Connecticut exports a number of products to Japan; these include transportation equipment, industrial and commercial machinery and computer equipment, chemicals and related products, and electronic and electrical equipment.

In higher education, Connecticut can boast of a number of fine programs in Japanese language and culture, including those at Yale and Wesleyan Universities and Trinity College, as well as at several secondary schools. The public school system in Norwalk is particularly noteworthy in this respect, offering Japanese language instruction at all levels, kindergarten through high school, and sponsoring active exchange and extracurricular programs.